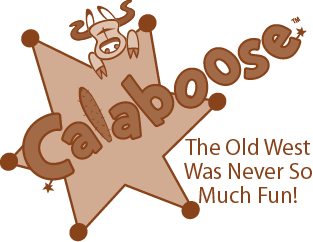 What is a Calaboose?

It’s an Old West word for "jail". We pronounce it "Kal-uh-boos".

It's a card game for 2-5 players, ages 12+. Players are sheriffs in the Old West. The goal is to collect the most valuable combination of bad guys. By "most valuable", we mean "worth the most money".

Is this a kid's game?

Yes and no. Kids certainly enjoy playing it, but the mechanic is both simple enough and deep enough for the game to be a lot of fun for adults. I think of it as being in the same category as Hearts or Crazy Eights, but not as deep as Bridge. It works well for both adults and kids.

So, how do you play?

Each player has a "jail" in front of them. You can keep up to five criminals in your jail. Once someone is in your jail, you can't take him out except to defend. On your turn, you can place a card in an empty cell in your jail or send it over to someone else's jail. That person can defend his jail with a higher powered bad guy, but has to send that bad guy to someone else's jail. The cards fly back and forth between the players, with different players being targetted at different times. Once players start sending bad guys to each others' jails (and they will), it gets very fun very quickly.

I don't get it! I have to send the defender to another jail?

If an attacking card is being placed "on top" of a card in my jail, do I lose that card?

Only if you don't defend against the attacking card. Whenever you send a card to someone else's jail, you can elect to either put it on top of a lower-powered card or in an empty space. However, if you defend, the attacking card is discarded, the card it attacked is left alone, and your defending card has to go attack someone else.

Yes, and yes. Our "mission" is to create games that the whole family can play, but I don't think that should limit us to making one genre of games. I'm hoping that Calaboose becomes a staple of family game nights. It's easy to learn, fun, and really generates a great sense of competitiveness.

How much does it cost?

What are the strategies?

There are several different strategies that work depending on how many players you have and how the cards come out. In fact, we've developed a whole page dedicated to strategy. Click here to see it!

Who is answering the questions on this FAQ?

That would be me. My name is Pat Matthews, and I'm the game designer. If you have any other questions, or would just like to chat a bit, please reach out to me directly on my contact page.